Social Media is a Medium of Engagement. How’s Your Proposal?

Social media. The name itself tells you that it’s not about standing behind a wall (or sitting behind a screen) and shouting out a one-­way message.

Emphasis on the “give.”

If you want your brand to get noticed on social media—and you should—you need to give your audience compelling content. Content that’s eye­catching, heartwarming, brain­-scratching or otherwise unavoidably engaging.

You also need to give them content they’ll actually see, which means knowing when and where to reach the audience you want to reach.

You need to give your customers a reason to engage with you on social media, and that means more than pushing discounts and announcing new products. It means starting conversations, sharing insights, inviting opinions and getting involved in the discussions that follow.

Too many brands see social media platforms as online billboards—places where messages can be pushed to the masses, but where the brands themselves remain detached and unresponsive. That line of thinking is a misguided approach to what could be the most effective and essential marketing opportunity you’ll ever have, both today and in the years to come.

The One­-Way Approach to Social Media is a Lonely, Lonely Road

It was the #1 reason people gave for deciding to “unfollow” previously liked/followed brands.

That shouldn’t come as a surprise. You’ve probably been annoyed by seeing the same commercial on TV three times in a half­hour span or constantly passing billboards for the same car accident attorney on your morning commute.

Clogging up social media feeds with content that pushes your message but doesn’t invite engagement is the same thing, only worse, because your audience doesn’t expect interaction from a commercial or a billboard. They expect it on social media, though, and when you’re both annoying them and ignoring them they’re sure to let you know.

If you approach social media as a one­way street akin to previous modes of mass marketing, where more reach and a bigger response are the result of bigger spends and a thicker spread, you’ll be chasing your efforts and your advertising dollars in a viciously diminishing cycle.

So, less really is more when it comes to social media, but that means making the most of it is even harder. Too much and you’ll lose followers and see a drop­off in engagement, but if all you’re doing is throwing a piece of promotion up against the wall (or feed) a few times a day you’ll hardly see anything stick.

When you’re limited to a handful of chances each day to spark interest in your brand and excitement about what you do, you have to make it count.

And there’s a lot of opportunity.

Chances Are Your Competitors Are Failing at Social Media Engagement

As many as 5 out of 6 questions to brands on social media don’t get a response.

That’s not overall comments, likes, and so on. That’s questions or other messages to brands that actually call for a response, and more than 80% of them go unanswered.

You might not see social media as a customer service channel, but your customers do. And, because it’s public, every social media interaction is a marketing event, and most brands are failing to dignify even a sizable fraction of those events with a response.

This lack of engagement means customers—often frustrated customers—are in control of many brands’ social media presence. It’s also a sign that their overall social media approach fails to grasp the fact that customers are looking for two­way engagement. Clearly, not an ideal situation…for them.

For you, though, the enlightened brand with a social media strategy that is becoming ever more refined as you read this article, this overall lack of engagement is a major opportunity. It means you can swoop in with swoon­worthy levels of customer commitment, providing not only answers to questions but original content that speaks to your audience’s brand­-based demands.

Promotion should never be the primary goal of your social media property. That’s most brands’ major misstep, and it’s all downhill from there. Pushing products, discounts, and promotions with pay­per­click ads, paid search listings, even a guest post here and there?

Rock on. But on your brand’s pages and feeds, you need to be pushing content that draws your audience in rather than simply pushing your messaging out.

You need to give them something, and not just something to buy.

Getting More Engagement from Your Social Media Efforts

If you’re not seeing the authentic engagement you’d like from your social media efforts, don’t just double­down on what you’re doing. Building a quality audience isn’t a matter of volume, it’s a matter of value, and that’s what you need to increase. Try adjusting your approach to give them more of what they want—which might include fewer posts—and see what that does for your engagement.

Give your customers narratives that help them emotionally connect to your brand. Give them information and insights that spark reflection, awareness and discovery to get them intellectually engaged. Give them visual content that causes an immediate reaction, that stands out from the blur of the typical social media scroll, that gets them viscerally engaged—often a necessary step before engaging the emotions and the intellect.

You have to reach out before you can pull anybody in, and social media lets you reach as far as you want.

You just need the right content, and the right attitude, to repeatedly pop this question to your audience:

How can I engage you today? 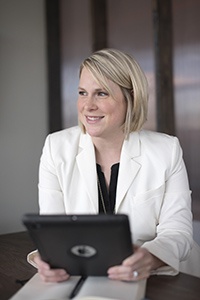